Excerpt from Tampa Bay Times article titled: All of the political recommendations of the Times Editorial Board. The Tampa Bay Times’ choices in the Nov. 3 general election. Published October 8, 2020

Democrat Margaret Good’s focus on health care and the environment is the perfect agenda for a district whose challenges are laid bare by the coronavirus pandemic and a warming climate. The state legislator is a pragmatic, energetic voice who could re-engage constituents in this three-county district, which stretches from southern Hillsborough County to Sarasota County. 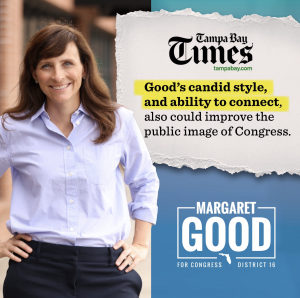 She also promises to be a much more visible representative, which is especially important in Riverview, Apollo Beach and other Hillsborough neighborhoods, given that this seat is considered Sarasota-based. Good’s candid style, and ability to connect, also could improve the public image of Congress.

Good, 44, is a Sarasota attorney who was elected to the Florida House of Representatives in 2018. As a state legislator, she worked to improve water quality and bring transparency to drug pricing — issues she would build on in Congress. Good wants to strengthen the Affordable Care Act by lowering out-of-pocket costs, adding a public option consumers can buy into and encouraging Florida to expand Medicaid. She also would change the law to allow Medicare to negotiate drug prices, passing those savings onto seniors. These are the right priorities for a district with many elderly, self-employed and uninsured workers.

Good is a serious, creative thinker who brings a nuanced approach to complex problems. Like virtually every Florida candidate, she opposes drilling off Florida, but also believes the state needs to better protect its water sources. She supports clean-energy efforts to drive down planet-warming greenhouse gas emissions, but opposes the Green New Deal, preferring more practical changes — such as tax credits for wind and solar technologies — to fight climate change without heavily disrupting the economy.

The incumbent, Republican Vern Buchanan, was first elected in 2006. The Sarasota businessman largely hews to the Republican Party line, though he has at times worked across the aisle on environmental and other issues, opposing, for example, drilling in the eastern Gulf of Mexico. Buchanan, 69, has also been strong on animal welfare legislation and helpful on veterans issues. He has voted, though, to dismantle the Affordable Care Act, which would jeopardize a critical area safety net. The district needs a more forward-thinking representative with a firm grasp of the region’s changing demographics.