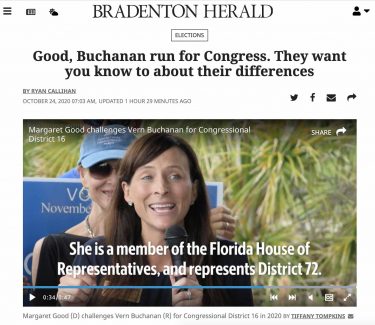 Good, Buchanan run for Congress. They want you know to about their differences 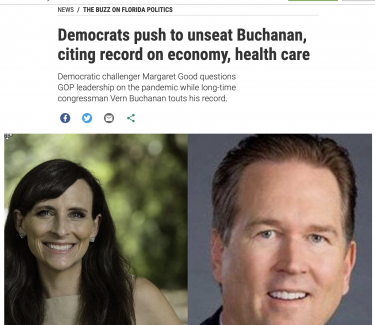 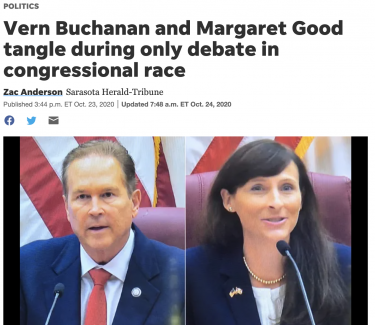 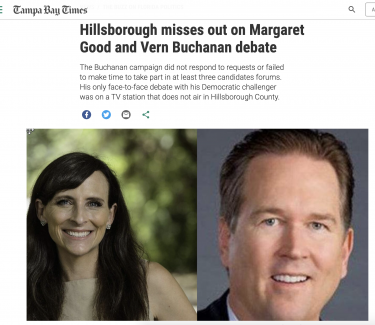 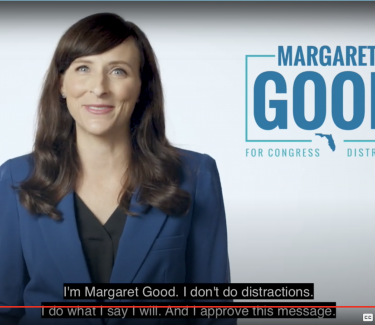 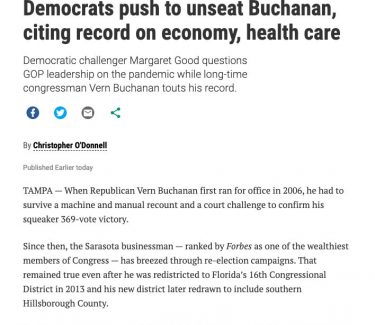 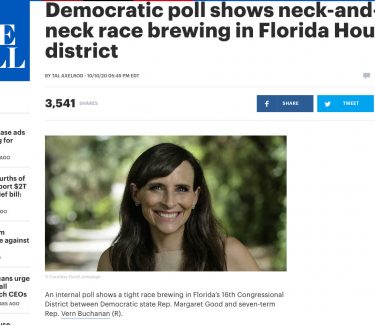 SOURCE: The Hill, Oct. 10, 2020.  To read the full story click on this link: https://thehill.com/homenews/campaign/520494-democratic-poll-shows-neck-and-neck-race-brewing-in-florida-house-district

Good’s record fundraising puts her on a trajectory to easily outspend Buchanan Sarasota, FL – Representative Margaret Good, Democratic candidate for FL-16 announced today that her campaign raised over $330,000 in the first two weeks of October, more than Buchanan’s campaign says they raised for the entire third quarter. Following a record $1.1 million third quarter, this puts Good on a trajectory to easily outspend Buchanan. “I am grateful to the thousands of supporters who 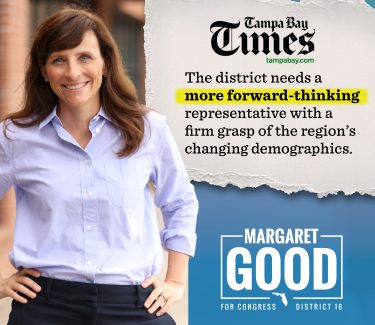 Tampa Bay Time Editorial Board Chooses Margaret Good for Congress Excerpt from Tampa Bay Times article titled: All of the political recommendations of the Times Editorial Board. The Tampa Bay Times’ choices in the Nov. 3 general election. Published October 8, 2020 District 16 Democrat Margaret Good’s focus on health care and the environment is the perfect agenda for a district whose challenges are laid bare by the coronavirus pandemic and a warming climate. The 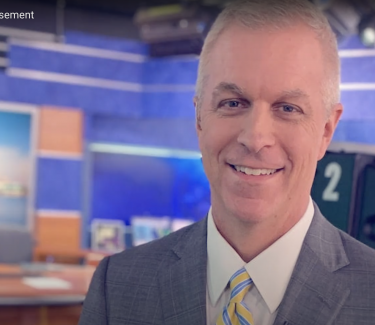 In New Ad, News Anchor Scott Dennis Endorses Good for Congress Sarasota, FL – Former WWSB- ABC 7 news anchor, Scott Dennis has announced his endorsement for Representative Margaret Good for Congressional District 16 in a new ad from Good’s campaign. The endorsement is the first one Mr. Dennis has given to a political candidate in his career in broadcast news. Scott retired from WWSB after 34 years as the prime anchor in the nightly 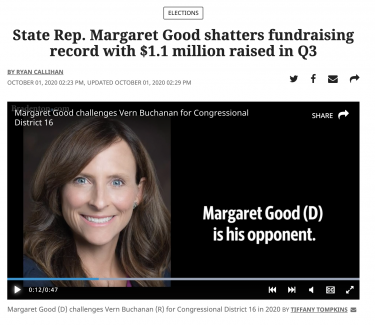 Click on the image to read the latest coverage of Margaret Good’s record-breaking fundraising for third quarter in the Bradenton Herald. https://www.bradenton.com/news/politics-government/election/article246142180.html 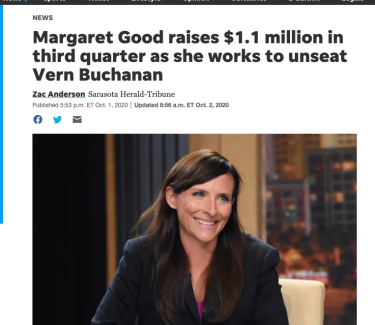 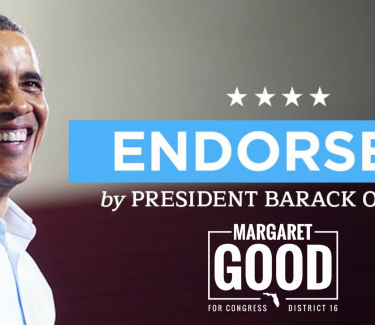 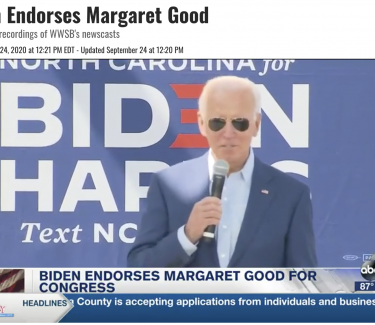 Sarasota, FL – Vice President Joe Biden has announced his endorsement for Representative Margaret Good for Congressional District 16. The district is a critical seat for democrats to flip in November and Good was identified early by the Democratic Congressional Campaign Committee as a strong candidate to flip CD16 from red to blue. “Margaret’s commitment to putting aside partisan politics to deliver results for working families is exactly what we need more of in Washington.

If you turn on the news during this election season, you will hear endless commentary about how divided we are as a nation. Pundits will say that there are two Americas divided along party lines that want fundamentally different things. But is that really the case? Americans, regardless of party or ideology, overwhelmingly want access to quality affordable healthcare and lower prescription drug prices. We want Social Security and Medicare to be preserved, not only 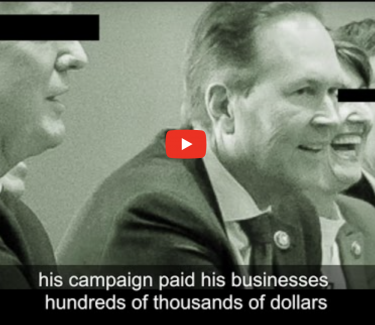 https://www.youtube.com/watch?v=JWb4qQs9tYI&feature=youtu.be The Facts Buchanan was named one of the most corrupt members of Congress five times by Citizens for Responsibility and Ethics in Washington, in part for his involvement in a straw donor scheme similar to the one Postmaster General Louis DeJoy has recently come under fire for. He also has a history of paying his family hundreds of thousands of dollars from his campaign and  has paid his own companies hundreds of thousands more. Most recently, Buchanan has come under fire for taking millions of dollars in PPP loans for his 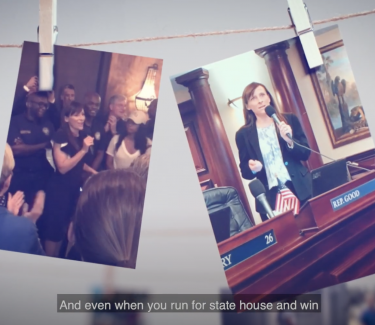 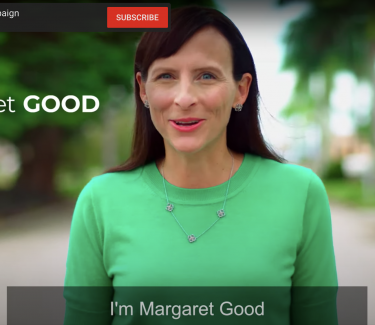 Margaret Good knows how to solve problems. She’s done it as a Florida state legislator, as an attorney, and as a nonprofit leader. She’s exactly the kind of leader that Florida — and Washington — needs!https://www.youtube.com/watch?v=WDb5G1dHhUQ&feature=youtu.be

There are three states—Pennsylvania, Florida and Montana—which, by flipping one House seat in each, become majority Democratic delegations. According to the Cook Political Report, there are two Pennsylvania House seats currently held by Republicans that are sufficiently up for grabs to be in reach (the 1st and 10th Congressional Districts), two such seats in Florida (the 15th and 16th Congressional Districts) and one in Montana (a state with only one House seat but a Democratic governor and senator).

“We are fighting for equality and justice on so many fronts in this country,” said Magaret Good (FL-16). “I am proud to have the endorsement of the Human Rights Campaign not only because of their leadership in the fight to end discrimination against LGBTQ people but also because of their fundamental understanding that LGBTQ issues intersect with the fight to end discrimination of people of color and the fight for gender equality. Working together, I know we will create a more just, more free society.”

Since her election to the Florida House of Representatives, she has been a leading advocate for our environment. As a native Floridian, Good understands both the beauty and fragility of natural Florida. Growing up near one of Florida’s lakes and living along the Gulf Coast, she has personally seen the damage resulting to our waters from mistreating our environment. While in the Florida House she has been an outspoken supporter of protecting our environment, working across the aisle to submit numerous bills to improve Florida’s water.

Celebration of the 100th Anniversary of the Suffrage Movement

Please join us for a celebration of the 100th anniversary of the suffrage movement with a live performance of JEANNETTE, the first woman elected to Congress, starring Ari Afsar and writer & producer Lauren Gunderson.

Democrats’ Record Fundraising Echoes 2018—Could It Bring Another Blue Wave?

After the strong fundraising numbers came in, the DCCC announced Thursday it was adding six more candidates to their so-called “Red to Blue” list: Margaret Good in Florida, Amy Kennedy in New Jersey, Desiree Tims in Ohio, Christina Finello in Pennsylvania, as well as Sima Ladjevardian and Candace Valenzuela in Texas.

Good also announced a fundraising record for her campaign, raising over $50,000 more than Buchanan – $476,900 compared to his $426,600. The Democratic Congressional Campaign Committee announced that Good is worthy of the organization’s Red to Blue program. The program, which is aimed at winning back Congress from Republicans, will supply Good’s campaign for the 16th district seat with fundraising support, strategic guidance and staff resources.

The Democratic Congressional Campaign Committee announced Thursday morning that Good is a “top-tier candidate” worthy of the organization’s Red to Blue program, which is aimed at winning back congressional seats from House Republicans.

The program will supply Good’s campaign with organizational and fundraising support, as well as strategic guidance and staff resources. According to a DCCC press release, Good, D-Sarasota, earned a spot on the list thanks to strong local support, grassroots engagement and aggressive fundraising.

Good has earned a spot on the Red to Blue program by surpassing aggressive goals for grassroots engagement, local support, campaign organization and fundraising. Beyond her record of service and demonstrated ability to build a winning campaign against a Buchanan, Good has a bipartisan message that connects with voters in Florida’s 16th Congressional District and deep ties to the communities she aims to serve.

Broadway producer Tom Kirdahy will host an online fundraiser for Sarasota Democrat Margaret Good in her bid for Congress.

The event is themed around LGBTQ+ rights, and will include appearances from Sarah Silverman, Tony Goldwyn, Dan Bucatinsky, Matthew Lopez and Anthony Chatmon II.

TALLAHASSEE (CBSMiami/NSF) — Agriculture Commissioner Nikki Fried asserted Thursday the governor and state Cabinet members should have been jointly coordinating the response to the coronavirus pandemic, as a new report showed another 173,731 first-time unemployment claims were filed last week in Florida.

DEO confirms ‘security incident,’ those affected have been notified

SARASOTA, Fla. (WWSB) – ABC7 has learned that there has been a security incident regarding re-employment assistance with the Department of Economic Opportunity website. The department says it was caught within an hour and those affected will be given identity protection.

SARASOTA, Fla. — A laid off Sarasota bartender who waited months to receive his unemployment benefits said once the money hit his bank account on Monday, he noticed there was a missing week in mid-April.

$2.6 billion distributed in unemployment benefits by the DEO, dozens of paper applicants unsure of where they stand

SARASOTA, Fla. (WWSB) – The Florida Governor said on Tuesday that the Department of Economic Opportunity has distributed $2.6 billion. Governor Ron DeSantis said during a news conference in Tallahassee that the DEO has distributed more money in the last ten weeks than they have in five years. 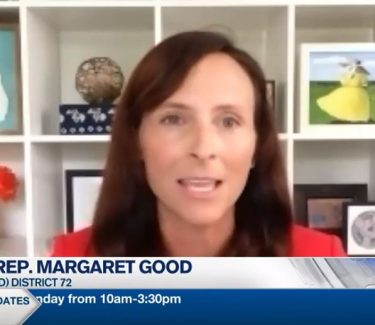 SARASOTA, Fla. (WWSB) – When Gov. Ron DeSantis told reporters last week that most people who applied for unemployment benefits had received their benefits, many of you reached out to ABC7 to say that wasn’t the case. Representative Margaret Good echoed this,”“We have constituents call us every day that have applied for unemployment benefits in March and have yet to receive a check.” 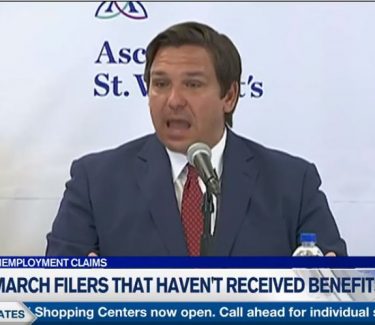 Did you file for unemployment in March and still haven’t received benefits?

SARASOTA, Fla. (WWSB) – Florida Governor Ron DeSantis in a news conference in Jacksonville Friday said 99.99% of people who filed in March, qualified for unemployment and completed their applications should have received benefits. Many of you have reached out to ABC7 saying that’s not the case. “We have constituents call us every day that have applied for unemployment benefits in March and have yet to receive a check,” said Florida House of Representative for District 72, Margaret Good

NORTH PORT — It took six minutes for the North Port City Commission to approve a resolution urging the state Legislature and Gov. Ron DeSantis to ratify the Equal Rights Amendment — which would make the state of Florida the 38th and final state needed to amend the U.S. Constitution.

Sarasota state Rep. Margaret Good is making another push to mandate background checks on all Florida gun purchases. Good filed HB 451 in advance of the 2020 legislative session, which begins in January. The bill would expand background checks on firearm transactions to include purchases from a private seller. 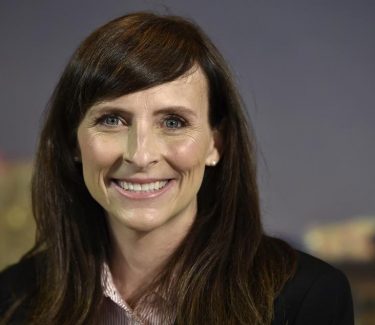 Good’s third quarter fundraising haul is the fourth best among all candidates running in Florida’s 27 congressional districts, behind only the $601,002 raised by U.S. Rep. Brian Mast, the $501,489 raised by Democratic U.S. Rep. Debbie Mucarsel-Powell and the $454,303 raised by Maria Salazar, who is challenging U.S. Rep. Donna Shalala. Salazar also loaned her campaign $50,000.

The latest fundraising totals in the race for Florida’s 16th Congressional District show that Vern Buchanan’s Democratic challenger is ready to put up a fight.

There is nothing more important than protecting Florida’s water, especially here on the Suncoast. Last year’s disastrous red tide and blue-green algae outbreak were clear signs that we need to reevaluate the rules governing our water, including how we manage stormwater. Our problems will worsen unless we address the pollution coming from new development and redevelopment.

In an interview this week, Democratic state Rep. Margaret Good of Sarasota, expressed confidence she can unseat six-term GOP Congressman Vern Buchanan, but stayed on message instead of talking about strategy or details.

Margaret Good to run against Vern Buchanan for Congress

Sarasota state Rep. Margaret Good — a rising star among Florida Democrats — told the Herald-Tribune Sunday that she will challenge U.S. Rep. Vern Buchanan for his seat next year, a move that makes Southwest Florida one of the preeminent congressional battlegrounds in 2020.